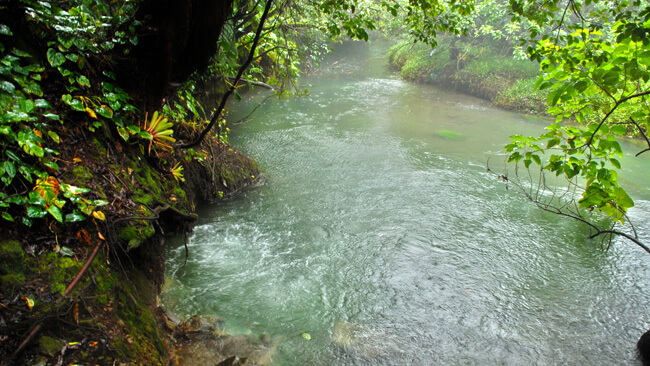 Costa Rica is famous for its dense rainforests. These magnificent jungles cover much of the country and are home to an amazing array of exotic plant and animal life. As the name implies, these forests can get a little damp, but you might be surprised by how much the weather and climate of Costa Rica’s rainforests can vary.

Many different parts of Costa Rica have rainforests, but the climates of each forest can vary depending on where it is located. For example, the central Pacific region that encompasses Manuel Antonio, Jaco and Puntarenas is known for its high temperatures and humidity, however under the canopy of the rainforests in these areas temperatures are often much cooler than those found in the Northern Pacific Coast.

The reason for these differences is largely due to variations in elevation, as higher altitudes in the mountains of the central Pacific are often accompanied by lower temperatures. In addition, the central Pacific region is where the true rainforests really start; the forests of the North are typically classified as tropical dry forests.

Rainforests differ from cloud forests by elevation, as cloud forests are found in cooler-climate of the central mountain region, above 4500 ft (1500 m). Some of Costa Rica’s rainforests can receive between 80 and 260 inches of rain every year, and while temperatures can exceed 100 degrees Fahrenheit (37 degrees Celsius) in the daytime during the height of the dry season, the mercury can fall to the low 60s (around 15 degrees Celsius) at night.

Timing Your Visit for a Rainforest Experience

Although Costa Rica enjoys a temperate climate year-round, the timing of your visit will have a significant impact on the weather you’re likely to experience in the country’s rainforests.

For most parts of the country, the dry season runs between December and April. While Costa Rica has a clearly defined rainy (or green) season, that doesn’t mean you won’t see some heavy rainfall during the dry season. Costa Rica’s Caribbean coast often experiences strong storms that form over the Atlantic Ocean year-round, resulting in heavy rainfall. This, of course, provides the lush vegetation of the rainforest on the eastern slopes of the Central Mountain range, but it also means you should be prepared for a wide range of climate conditions in this area.

If you plan to visit Costa Rica’s rainforests during the dry season, wear comfortable, loose-fitting clothing, preferably made from a lightweight material such as linen. Temperatures can soar in the dry season, making the rainforests very hot and humid, so plan to dress accordingly.

Conversely, if you’re coming to Costa Rica during the rainy season, bring a light, waterproof jacket and long pants, not so much for the temperatures as they stay the same as in the dry season. However, early afternoon showers are very common and although they don’t last for long, rain could come as a surprise out of the blue skies.

Regardless of when you choose to spend time in Costa Rica’s stunning rainforests, there are a few things you’ll want to bring with you to ensure you have an unforgettable trip.

The first is insect repellent. Costa Rica is home to an incredible variety of bugs, including some bothersome pests like mosquitoes. Applying a moisture-resistant insect repellent before venturing into the heart of the Costa Rican rainforest is a great way to ensure that the bugs leave you alone.

Another essential when spending time in the rainforest is water. Costa Rica’s national parks and wildlife reserves are among the most beautiful places on Earth, but many of them are highly isolated, and the nearest services may be many miles away. Bring bottled water, particularly if you plan on engaging in potentially strenuous physical activities like hiking—the last thing you want is to end up dehydrated!

More than a quarter of the Costa Rica’s land consists of national parks, wildlife refuges and biological reserves. This is why this country’s greatest attraction is its profusion of  biodiversity. Costa Rica is home to some of the most extravagant exotic flora and fauna on Earth, and it is one of the most bio-diverse places on Earth. For such a small country, this is simply remarkable. The green and lush forests of Costa Rica are teeming with wildlife, of which some are on the endangered species list; mammals, amphibians, reptiles, birds, and insects are simply everywhere.

The rainforests of Costa Rica are some of the most pristine and preserved of the planet. It is home to the rare primary forests and secondary forests.

When wandering in a rainforest there is a connection that takes place, a very special connection with Mother Nature. It is surprisingly dark, cool, and humid. The essence of the planet is there, unchanged, strong and fragile, enchanting and beautiful. The modern world and big cities suddenly cease to exist and nothing matters so much anymore.

In the forest live creatures that are yet to be named. They are the reminders of the extraordinary biodiversity of this planet. The silence of the rainforest is made of the chanting of the birds, insects, and frogs, or of the cry of the monkeys. Maybe there is a stream nearby that ads to the music. The rasping of cicadas, so loud it is barely possible to stand it, in harmony with the whistle of wrens and the chattering of the parrots.

Where Are the Rainforests in Costa Rica?

The rainforest are found in the foothills and in the lowlands on both sides of the mountain ranges, Atlantic and Pacific sides. Many destinations in Costa Rica have rainforest trails that can be visited in small groups with or without a guide. There are too many to mention them all; however, these should definitely be seen, whenever possible:

These rainforests are all easily located and accessed.

The climate of Costa Rica is almost as diverse as the landscape of this stunning country. Despite being less than 1,000 miles from the equator, Costa Rica has a range of different climatic conditions, some of which are affected by the delicate ecosystems that can be found across the country. Although it’s true that many parts of Costa Rica are hot and sunny, don’t make the mistake of assuming this will be the case wherever (and whenever) you visit, as the weather can vary quite widely from one region to the next.

Although Costa Rica’s seasons are reasonably well defined, the diversity of the country’s landscape means that some provinces experience significantly different weather than others.

Guanacaste, Costa Rica’s northwesternmost province, is the driest part of the country. Temperatures here rarely fall below 85 degrees Fahrenheit (around 29 degrees Celsius), and the region receives much less rainfall than other areas. During the dry season, it is not uncommon for Guanacaste to go several weeks without any rainfall at all, and even during the green season, precipitation is often limited to the occasional scattered afternoon shower.

On the other hand, some provinces receive more than their share of rainfall. Limon, Costa Rica’s easternmost province bordered by the Caribbean Sea, is much wetter. Typically, Limon’s climate is the opposite of other Costa Rican provinces. As such, the dry season runs from May to November, and the green season lasts from November through April.

Depending on where you plan to visit, you could experience one or more of Costa Rica’s microclimates – highly concentrated areas where rainfall, temperature, and other conditions vary depending on factors such as the terrain and elevation.

One of the country’s most famous microclimates and a consistent draw for eco-tourists is the rainforest. As the name suggests, these dense jungles receive a lot of rainfall, which is what helps so many different types of exotic plants and flowers thrive in these environments. This, in turn, can make conditions in the rainforest very humid. However, this can also depend on which rainforest you’re visiting. To read more about the rainforest go to the Rainforest Weather section.

In addition, cloud forests often feature dramatic shifts in altitude and topography – the difference between the tallest points and the shallowest valleys. This variety in topography results in heightened accumulation of atmospheric moisture and rainwater. To read more about the cloud forest go to the Cloud Forest Weather section.

Of course, mountainous areas have their own microclimates. Reaching elevations of up to 11,000 feet in some areas, mountains, and the surrounding countryside are often significantly cooler than areas closer to sea level. This is particularly true of mountains like Cerro Chirripo, the tallest point in Costa Rica. Even during the high season, temperatures at this mountain can plunge to between 45 and 55 degrees Fahrenheit (7-12 degrees Celsius). Not everywhere in Costa Rica is hot and sunny year-round!

Much of Costa Rica is covered in dry forest. As the name suggests, these areas receive little rainfall, even during the green season, and are typically found in southern Guanacaste and parts of the Nicoya Peninsula. Despite the relative lack of precipitation, many hardy plants, flowers and trees thrive in these environments.

When we think of Costa Rica, we think rainforest, jungle, exotic animals, gorgeous pristine beaches, awesome ocean, and raging volcanoes. The rainforest always has been and always will be mesmerizing. Those who visit one will never forget the first impression of awe upon entering the almost miraculous world of nature at its very best. Check out their testimonials!