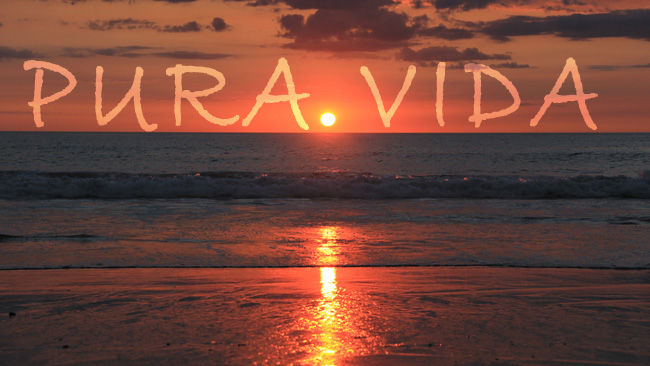 If you have been to Costa Rica, or if you are planning a Costa Rica vacation, one term you should be familiar with is “Pura Vida” (pronounces poo-rah vee-dah).  Simply translated, it means “simple life” or “pure life”, but here in Costa Rica, it is more than just a saying—it is a way of life.

Costa Ricans (Ticos) use this term to say hello, to say goodbye, to say everything’s great, to say everything’s cool. However, it is not the words that reflect the true meaning of ¡Pura Vida!. Pura Vida is the way Ticos live. Not surprisingly, Costa Rica has been named one of the happiest countries in the world, mostly because its inhabitants don’t stress about things the way most foreigners do. Ticos have a very relaxed, simple way of looking at life. No worries, no fuss, no stress—pura vida to them means being thankful for what they have and not dwelling on the negative.

Although many people love to use the phrase, not many know where the term actually originated. The most common explanation comes from a Mexican movie called  ¡Pura vida! that came to Costa Rica 1956 (directed by Gilberto Martínez Solares).  In the movie, ‘pura vida’ is the saying used by the main character who remains optimistic, despite unfortunate circumstances that continue to surround him.  Although it took a little while to catch on, the phrase pura vida was being used nationwide by 1970. Today, it is an inherent part of the culture.

Although many people use the saying ‘pura vida’, until you’ve been to Costa Rica, you will not truly know what pura vida feels like. It’s an emotion, it’s an attitude, it’s happiness, and it’s a way of life.  Once you’ve visited, you will understand the true meaning of pura vida.