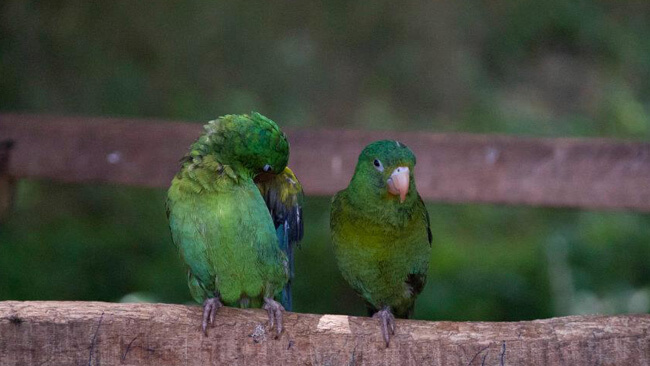 Parrots are one of the largest families of birds with over 365 species in the world. Costa Rica has 17 species of parrots and parakeets. They vary a lot in size, from tiny little parakeets to very large macaws. Parrots are one of the few birds that can imitate human voices. They live very long lives, some are known to live over one hundred years. Many people enjoy parrots and parakeets as pets. Poaching is still a huge problem in Costa Rica and throughout Central and South America. Habitat destruction and illegal pet trade throughout the world has decimated the parrot populations throughout the world. Costa Rica has many species of parrots and parakeets dwindling in numbers. Three species, the Scarlet Macaw, the Great-green Macaw, and the Yellow Naped Parrot are already on the endangered species list.

Parrots and parakeets are widely distributed throughout Costa Rica. The Scarlet Macaw is found from the Central Pacific south to the Osa Peninsula. There are several rescue organizations that are breeding in Guanacaste as well, with some success. Visitors interested in the Great-green Macaw, will need to visit the Caribbean side of Costa Rica. The very small existing population lives on the Caribbean slope. The endemic Red-fronted Parrolet, found in the Cloud forest is one of the most wanted species to see among birdwatchers. It’s only found in Costa Rica and Western Panama.

Parrots and parakeets are among the few species of birds who have bills powerful enough to break down seeds and nuts for their diets. They have little competition as seed harvesters. The lush nature of the tropical rain forest and the dry tropical forest, provide a bounty for them, allowing for successful reproduction. Through education, conservationists hope to halt the destruction of habitat and the kidnapping of parrot and parakeet chicks, so that these most beautiful creatures of the tropics can thrive.