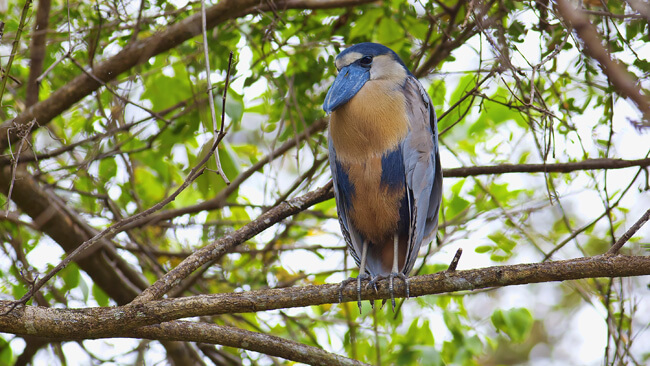 Year-round, though temperatures and humidity can be intense at the height of the dry season between December and April

Despite its location in Costa Rica's driest province, Palo Verde National Park sits at the estuary of the Rio Tempisque, making it a haven for many species of bird.

Palo Verde National Park is one of Costa Rica’s most unique wildlife reservations. During the dry season, much of the park becomes arid due to the receding of the Rio Tempisque, but in the rainy season, the park comes to life. Palo Verde boasts a diverse range of terrain, from humid marshes and mangrove swamps to dense thickets of tropical dry forest. Although much of the park itself is flat, Palo Verde is surrounded by rolling limestone hills, making it an ideal destination for visitors who want to get away from it all and experience the breathtaking natural splendor of Guanacaste.

Hikers with an appreciation for wildlife will be in their element in Palo Verde. There are many scenic trails that wind through the brackish marshes of the park, offering visitors the opportunity to observe the many species of animal that inhabit the park. Birdwatchers come from all over the world to see species such as the boat-billed heron in its natural habitat, and during the rainy season, the park becomes home to more than a quarter of a million birds including migratory waterfowl from North America.

Aside from the stunning variety of birds that call Palo Verde home, the park’s naturally humid climate also attracts many insects, amphibians and lizards. More than 55 species of reptile inhabit the park, and Palo Verde is where the largest concentration of freshwater crocodiles in Costa Rica is found. In addition, Palo Verde is also home to the largest population of jaguarundi, a reclusive species of big cat, in Costa Rica.

During the rainy season, some of the hiking trails at Palo Verde National Park become impassable due to the rising waters of the Rio Tempisque. However, the rains bring with them an abundance of wildlife and blooming vegetation, making the area particularly beautiful. Riverboat tours operate in the park during the rainy season, so hardy travelers determined to see this remarkable park at its peak will not be disappointed. Birdwatchers should visit the park between January and April, when temperatures are a little more comfortable and the birds are numerous.

Despite its natural beauty, Palo Verde National Park is ruggedly isolated. There are few facilities in the park aside from the ranger station and the nearby Lomas Barbudal Biological Reserve, so visitors planning to spend time in this reserve should expect to get back to nature far from the comforts of civilization.