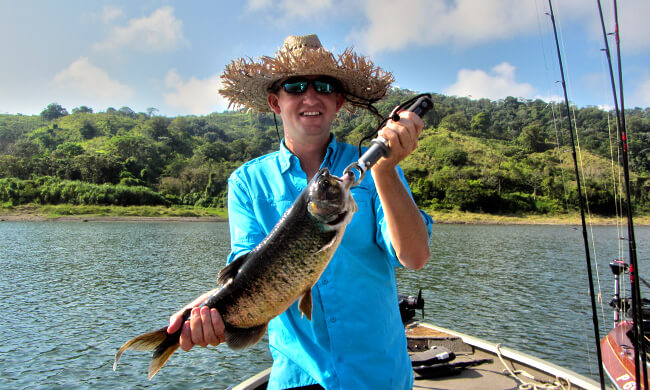 Machaca are one of the most aggressive and hardest fighting fresh water fish in Costa Rica, so much so they have earned the nickname “mini tarpon”. Once hooked they will leap out of the water several times.  They are actually related to piranha, although the machaca in Costa Rica are actually vegetarian for the most part.  They typically aren’t considered table fare, but they are used quite often in soups.

DESCRIPTION: The sides of machaca are a brilliant silver color with large scales while the head is darker if not golden in color.  They have very robust flanks and the big ones are nearly football shaped.  Besides their silver color, their trademark is their set of ferocious, almost human-like teeth.

FEEDING HABITS: Despite their intimidating set of chompers and being related to piranhas, machaca are actually in large part vegetarians.  They feed on leaves, fruit, and seeds that fall into the water, as well as the occasional insect.  With their feeding habits and aggressive nature they are a perfect target for fly fishermen.  An 8 wt rod with a 9-10 ft leader is recommended.

SIZE: Machaca vary in size based on where you are in the country.  The machaca found in the tropical rivers along the Pacific Ocean are often much smaller than their kin found in northern Costa Rica at the inland lakes.  Most machaca are 2-6 lbs, but large ones can reach 10-15 lbs.  The world record machaca was actually caught here in 1991, weighing in at 9 lbs 8 oz.

WHERE FOUND IN COSTA RICA:  The biggest machaca without doubt are found in Lake Arenal.  The 33 sq mile lake is the largest in Costa Rica and is also home to other fish like guapote and mojarra.  Large machaca are also found farther north in Cano Negro.  They also inhabit the low land tropical rivers, but they tend to be slightly smaller there.  They are typically found near river mouths & creeks in Lake Arenal and in calm water under trees and other cover in the rivers.

BEST MONTHS: Machaca can be caught all year round in Costa Rica.  They primarily feed at the surface as they are accustomed to falling fruit & seeds, so even if the water if murky, shallow, or deeper than normal they will still hit your lure or fly if it makes a big enough splat.