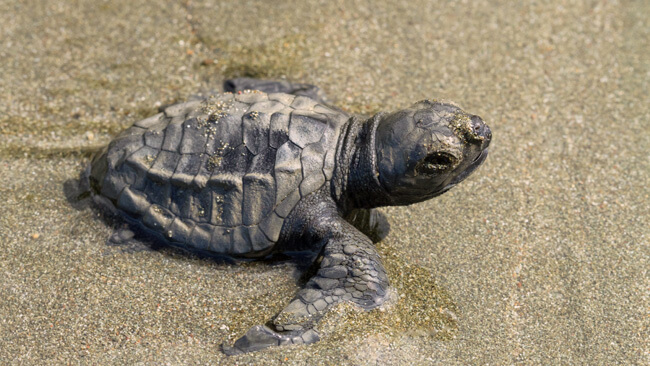 It supports the largest nesting colony of leatherback sea turtles (baulas) on the Pacific Coast of Costa Rica, with a population size of about 800 female turtles nesting per year.

Located on Costa Rica’s Pacific coast in the northern province of Guanacaste near the tourist town of Tamarindo is Las Baulas National Marine Park. Founded in 1995, it’s another of Costa Rica’s important sea turtle nesting sites.

Playa Grande is home to a remarkable natural phenomena that takes place annually right on its sands. The Leatherback Turtles (Las Baulas), an endangered species, make their way to the beach en masse each year to bury their eggs in the white sand. The park was founded to protect these magnificent creatures and their reproduction process.

The park encompasses about 1,100 acres (445 hectares)—an area a little bigger than Central Park in NYC—and is made up of four beaches: Playa Grande, Playa Langosta, Playa Ventanas, and Playa Carbon. The two mangrove estuaries in the park are the ‘Estero de Tamarindo’ and the ‘Estero de San Francisco’, the former of which is the biggest mangrove estuary in Latin America. In addition, this national park also extends 12 miles offshore as well, measuring 54,400 maritime acres (22,000 hectares), which protects the sea turtles from poachers and tourists alike.

The Northwest Pacific is one of the driest climates in Costa Rica. The beach areas have a fairly steady year round temperature with daytime highs averaging in the upper 80s to lower 90s. Nighttime lows are usually in the upper 70s. Precipitation varies through the year with the nicest weather between November and August.

Playa Grande is known as one of the largest leatherback turtle nesting sites in the world. Every year between October and February, hundreds of leatherbacks, or Dermochelys coriacea, come ashore to lay their eggs. These Jurassic reptiles, the largest of all sea turtles, can weigh upwards of 1,500 pounds (680 kg) and measure 6-feet (1.8 m) in length.

The beaches in Las Baulas Marine Park support over 800 nesting sea turtles annually, but despite impressive regional numbers, the leatherback remains highly endangered and at risk of extinction in the Pacific.

Guided evening turtle tours can be arranged at the Las Baulas ranger station in Playa Grande. The cost is $25 for visitors and $5 for nationals and includes a guide and the park entrance fee. Travelers staying in Tamarindo can book a turtle tour with the Local Guide Association at Tamarindo’s satellite station. Tours cost $35 per person, including the $10 park entrance fee. Groups travel ten minutes by boat through the Tamarindo Estuary to access Playa Grande.

The protected nesting ground for thousands of leatherback turtles also protects 174 species of birds and a number of different animals that live in the estuaries here. Home to the white ibis, the cattle egret, the blue-winged teal, and the muscovy duck, this park also looks after capuchin monkeys, raccoons, crocodiles, pacas, and grey squirrels, as well.

There is excellent bird and wildlife watching within the park. The nearby Tamarindo Wildlife Refuge, a saltwater mangrove estuary, is thick with black-bellied whistling ducks, roseate spoonbills, yellow-crowned night herons, kingfishers, and crocodiles. Howler monkeys, raccoons, and coatimundis are also frequently spotted. Visitors can rent kayaks and paddle on their own or tour the estuary with a naturalist guide. Several tour operators in Tamarindo offer guided kayak trips.

Playa Grande is a popular attraction, besides the turtles, due to the amazing waves for surfing. Its very consistent break almost always has fun, rideable waves, and it catches more swell usually than other spots around. Playa Grande boasts a sandy bottom beach break with perfect left and right peaks. It could hold waves up to almost double overhead.

There are so many reasons to visit this beautiful national park and enjoy everything it has to offer. Las Baulas National Marine Park is a great place to visit with family and friends and have an amazing time. Just remember why the park was founded: to protect and raise conciousness for our environment and take action to take care of our natural resources.

Depending on the type of activity you’re looking to do, the best time to come to the park will change. Nighttime visits to the beach to observe turtle nesting are only allowed from October to February.
If you are looking to just visit the park, enjoy the sun, sand, and surf, the best time will be from December to May which is dry season in Guanacaste. On the other hand, if you are a bird lover, we recommend you to come from February to April.

The region has some of the nicest beach weather in Costa Rica. Even during the rainy season it is likely that the sun will be out most of the time, and you will enjoy brief afternoon or overnight showers.

A ranger station at Playa Grande is staffed with bilingual guides. A limited number of visitors are allowed on turtle tours each evening.

Public transportation: Yes. From Santa Cruz main bus station take the Playa Grande bus, the only 2 schedules available are at 5 am and 1pm. There is also a direct bus from San Jose to Matapalo which is the town just before Playa Grande. Its about 6 km from the park.
Public restrooms: Yes; about 100 meters from the park main entrance.
Shopping: The area several “pulperias” or corner stores around and in Matapalo but the biggest supermarket will be Super Compro in Huacas about 20 minutes away.
ATMs: No; the nearest ATM is in Huacas, Tamarindo and Reserva Conchal
Gas stations: Yes, one in Huacas (20 minutes) and one in Villa Real (25 minutes)
Cell Phone Reception: Reliable
Restaurants: There are several options around the area like pizza places and local restaurants in Playa Grande
Nearest medical facilities: There is a private clinic next to Kike’s Place. There are private and state medical clinics in Tamarindo and Villa Real (25 min from the park). The nearest hospital is in Nicoya which is about 1½ hours away.