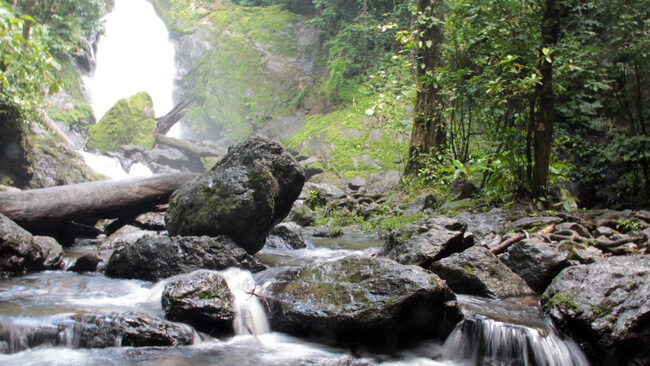 Corcovado National Park at a Glance

Corcovado is a true wonder of the world, a magical place in the southern part of the Pacific coast of Costa Rica, in the Osa Peninsula. It is considered to be one of the most biologically diverse places on Earth. Those who seek close and unique contact with nature will love this haven that is home to the only tropical primary lowland rainforest in the world and to the plethora of endangered animals and plants that call it home. Because Osa used to be an island long ago, some animals had started a separate evolution, leaving the region with subspecies that are found nowhere else on the planet.

The breathtaking beauty and serenity of Corcovado National Park is too complex for words. It is one of the most remote parks of the country, with astonishing forests and stunning, deserted beaches. This is the paradise of nature lovers, explorers, hikers, and scientists alike. The national park itself was created in 1975 for its own protection and to put a stop to illegal gold mining and logging. It is today a number one destination for adventure seekers and those who appreciate natural beauty and conservation. It is, however, not easy to reach, which helps to keep it safe and undisturbed.

The climate is hot and humid in Corcovado, and it enjoys quite a lot of rain, thus it is lush green and verdant. Hiking is the favorite occupation for exploring its mysterious and magnificent rainforests that open on to stunning white-sanded beaches and turquoise blue sea. This is nature at its best, the way it was intended to be always and how it should stay. Corcovado has four rangers’ stations spread out in strategic locations; without a doubt, it is best to see the park through a guided tour at least once! While the trails are clearly indicated, the guides will help you spot animals and plants and give you authentic and fascinating information. Most guides are found in Puerto Jiménez or in Drake Bay; when in Puerto Jiménez, make sure to inquire about the night hikes in the jungle, a thoroughly exciting experience.

Corcovado has no fewer than 13 major ecosystems, including beaches, fresh water herbaceous swamps, primary lowland rainforests, mangrove swamps, jolillo palm groves, streams, and lagoons. It encompasses 140 mammals, 400 species of birds of which 20 are endemic, 116 amphibian and reptile species, and about 500 different types of trees, all on a surface area of 41,000 hectares.

The best time to visit Osa Peninsula is dry season, which runs from January through April, when there is little or no rainfall and reliable sunny weather. This is also the most popular and expensive period. During the green season (May through August/September) afternoon showers are common, but you will get the best value as lodges drop their rates significantly. Avoid September and October as many lodgings are closed during these two rainiest months.

Transportation: Yes; flights are available to Puerto Jiménez, Golfito, and Drake Bay. Others options are bus and boats.
Public amenities: Yes; at the four ranger stations, there are public bathrooms, showers, and drinking water.
ATMs: You will need to use the ATM in Puerto Jiménez.
Gas stations: You will need to use the gas station in Puerto Jiménez
WiFi or Internet cafés: Hotels on the Osa Peninsula have internet.
Cell Phone Reception: None. The Sirena station offers emergency phone usage only.
Restaurants: No; the Sirena station does offer meals service with prior reservation.
Nearest medical facilities: Sirena station is well-equipped for emergencies but is not a medical facility. Puerto Jiménez has a small clinic, and Golfito has a hospital.