If you are looking for a one of a kind blue marlin fishing experience that cannot be matched anywhere in the world, our Costa Rica FADs fishing is the kind of trip for you.

Costa Rica has long been one of the most sought after destinations in the world. It is known for its incredible bill fishing, with great numbers of sailfish during your peak season and the occasional blue marlin in the mix. Over the past 4-6 years, the local anglers and charter boats have been developing one of the best marlin fisheries in the world.

There is a dormant volcano ridge that extends from 60 miles to 140 miles off the coast of Los Sueños and Quepos. These underwater seamounts have been the talk of the industry with the recent addition of FADs (Fish Aggregating Devices or seamounts) being deployed in strategic locations along that ridge.

These man-made floating objects specifically are constructed to attract fish, as well as natural objects found by fishermen. They can be anchored or drifting. Man-made FADs are constructed from a variety of materials. 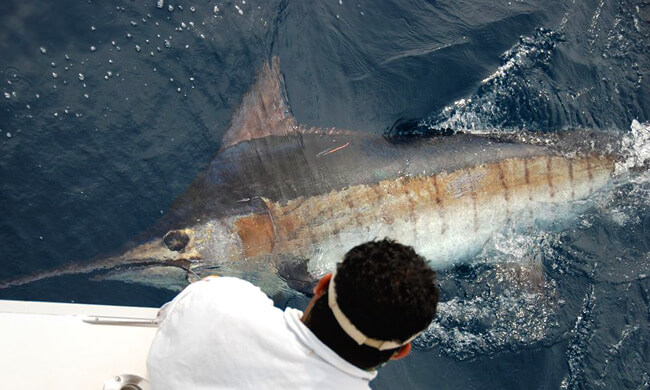 Ropes and lines encourage the settlement of marine plants and small crustaceans and mollusks, which in turn attract small fish. Sometimes, fish finders may be attached to a FAD allowing fishermen to electronically “connect” to the FAD and see how many and at what depth the fish are located.

The Costa Rica FADs fishing are holding absolutely incredible numbers of blue marlin and giving anglers the chance to have double digit blue marlin sightings with multiple releases in a single day.

To access these Costa Rica seamounts, you must spend the night on the boat and you can stay as long as 4-5 nights depending on how much time you want to spend on the water.

If you are looking for a one of a kind marlin fishing experience, that cannot be matched anywhere in the world, this is the trip for you.